The store will not work correctly in the case when cookies are disabled.

We use cookies to make your experience better. To comply with the new e-Privacy directive, we need to ask for your consent to set the cookies. Learn more

What’s the oldest winery in the world? 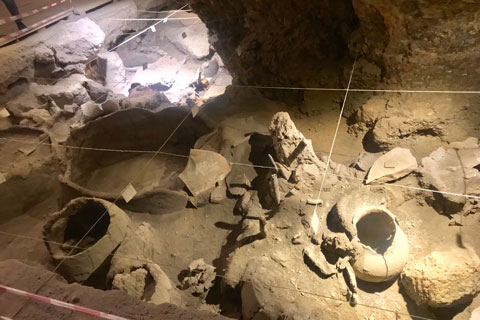 Armenia is a fascinating destination for oenophiles both in terms of history and traditions, diversity of terroirs and indigenous grape varieties. In this entry, let’s take a peek at the oldest winery in the world.

Since the ancient days, Armenia was famous for the winemakers, where original traditions were kept to date. Philosophers such as Herodot and Strabon, mentioned in their works that in 401-400 BC, when the Greek armies led by Xenophon "were passed" on the country Nairi (one of the most ancient names of Armenia), in the Armenian houses they were treated with wine and beer which was kept in deep dugouts in special large jars called "karas".  It is interesting that in karases with beer have been inserted reeds which served our ancestors as salt cellars. Carried out by academic Pytrovsky at 19-20 century archeological excavations have confirmed the fact that else in the 19th century B.C. Armenia was developed as a winemaking state.

Archeologists have made an exciting discovery in the mountains of Armenia, rewriting the history books on when and where humans first made wine. The evidence of the 1st winery dates from 4100 BC. In 2011 archeologists in Armenia announced the discovery of a wine production facility which is the world’s earliest known example of full-fledged wine production.

The cave complex found in southeastern Armenia can provide unique information on the way people made red wine around 6000 years ago - 900 years before the earliest comparable wine remains, found in Egyptian tombs.

It was discovered in the Areni-1 cave complex in the Vayots Dzor. Inside the cave, there are many interesting things that tell about the ancient life of people that live in this area. Early in the same cave archeologists discovered the oldest known leather shoe dated to about 5500 years ago. The site consists of a shallow basin to press grapes, a vat for storage, a wine press and fermentation jars.

It’s amazing that 6000 years old objects made from wood, leather, and other organic materials were in general preserved very well. The reason may be the microclimate inside this unique ecological niche, where there is a stable average temperature.

They also found grape seeds, remains of pressed grapes, and a dozen of dried vines. Moreover, archeologists were able to identify Vitis Vinifera seeds and vines in 2007, during the excavations co-directed by archeologist Gregory Areshian of the University of California, Los Angeles (UCLA) - although some historians believe Armenians had been winemaking since 7000 BC.

The common grapevine or Vitis Vinifera has been cultivated over thousands of years and is now responsible for around 10000 different grape varieties. This can cover over 7 million hectares of land. Although there are thousands of varieties, many are indigenous to specific countries or regions, with only a handful being commercially popular around the world. Every variety has its own nature and character, but the place where it is nurtured also plays a role in its personality.

Armenians have been making wine since ancient times. Nowadays, modern technologies bring new methods to the old traditions. Thousands of tourists come every year to try Armenian wines - aged in oak barrels waiting to be enjoyed -  in the sacred land of wine, tasting the country with every glass.